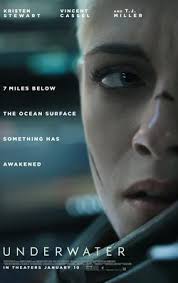 Underwater, a story of the survivors of an underwater drilling rig trying to get to safety after an apparent earthquake, but as the tagline says, “something has awakened”. It starts with a seemingly tacked on voiceover from Stewart about losing track of time while you are underwater as she is brushing her teeth. The lights flicker and water begins to drip, she is rocked by an explosion and the movie roars ahead at break neck speed. She runs to safety and meets up with her fellow survivors as they try to outlive the explosions and collapsing underwater rig. The scenes of them escaping from one hallway to the next is claustrophobic and can be hard to tell what exactly is going on or where they are actually going. Eventually the core group is together and it is apparent that they need to find escape pods to get to the surface, the only way to get to them is by walking the ocean floor to a nearby station.

The story might draw you in with the promise of giving you what it is advertising, disasters and monsters. You might also be drawn by the excellent cast led by Kristen Stewart, Jessica Henwick, and Vincent Cassel. Unfortunately only the acting is half-way decent, everything else falls very short. The other survivors, made up of TJ Miller and John Gallagher Jr. are perfectly fine, adding nothing but not taking away either. The overall lack of underdeveloped characters makes it all the more frustrating, you know they are there to add to the body count.

A lot of films of this genre pay homage to the films that have come before. It is nearly impossible not to tread on some tried and true formulas. There is a difference between inspiration and copying, one breeds innovative films like Event Horizon or The Thing, the other is a movie like this. There is no creativity or craftsmanship, just a paint by numbers copy. There some are rays of light in the murkiness. The final creature is super fun and the acting is compelling. The pitfalls however far outweigh any positives. At one point one of the humans bursts through the chest of a monster, bringing full circle the mockery of its forefathers.

Director William Eubank and his cinematographer Bojan Bazelli  shroud just about every underwater shot in murky blackness, and when one can see through this, the visual effects of the water and the creatures are jarring and visually displeasing. These things have all been done, and I’m sorry to say, have been done better. For further proof of a troubled production that was shelved for three years, the audience is told the plot mainly in newspapers clippings at the beginning and the end of the film.

I love monster movies, especially ones that are aware of themselves and embrace the “B-level” horror. This could have been great, but relies too much on already heavily treaded ground without being creative or stimulating, giving itself no justification to exist.