Inheritance is the story about about wealth, family, and corruption. Lead by Lily Collins (Tolkien) as Lauren, the daughter of the wealthy and powerful Archer Monroe (Patrick Warburton). Lauren is a district attorney in the middle of a very public case, the film starts with montage shots of her in court, jogging, and walking around Manhattan to show us just how busy and important she is. During an interview scrum outside the courthouse she learns that her father has passed away.

The family is all together for the reading of the will, her mother (Connie Nielson) received the family estate, her politician brother William (Chace Crawford) is given 20 million dollars and she receives 1 million. The family is shocked by such a bold affront but Lauren refuses to be angry about it and the cracks of this familial relationship begin to show. But that is not all she receives, she is pulled aside by the family lawyer and given a thumb drive. The drive contains a video of Archer detailing that the contents of a secret bunker on the property are now hers. 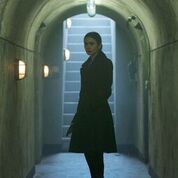 Inside the bunker there is a man (Simon Pegg) who knows secrets, secrets that could shatter not just her life, but bring down her entire family. Lauren is faced with trying to figure out who the mysterious man is and what his role is while wrestling with her conscience.

There have been several films and television shows of late that delve into the lives and family of the wealthy elite and do so more effectively. The film explores the heavily trodden path of rich and poor/above and below. The righteous and headstrong lawyer is faced with a moral dilemma. Does she turn her back on family or do the right thing. The idea of corrosive family loyalty, does the fact that they are family mean that they can twist their own morals to fit their needs?

Director Vaughn Stein (Terminal) is asking these questions, and they should be asked. Unfortunately the film plays more into the hand of silliness with the characters choices being more and more implausible. What started out promising, as a mysterious thriller becomes so convoluted that the ending drags along, needing to be explained in a series of “bad guy monologues” that are eye rolling at best. The twists are not very twisty and the turns are seen a mile away. The entire affair was nearly saved by the strong performances of Lily Collins and Simon Pegg, the cat and mouse game that ensues between them is a lot of fun to watch. Collins can clearly lead a film on her own, more starring roles are in her future.

There are worse movies out there and I did have fun watching the mystery unravel.The film is at its best when we are in the dark about Peggs motivation and trying to solve the mystery along with Collins’ character.  A tighter script and more fleshed out characters could have created a more unique story something closer to Parasite. Instead of the last thirty minutes resembling something more akin to a Lifetime movie.