The Way Back, is the story of Jack Cunningham (Ben Affleck), a washed up former high school basketball phenom with a traumatic past. Working construction during the day and drinking himself into a stupor at night, the mystery of what drove him to such lows is not immediately clear. The story presents itself as a formulaic underdog story but ends up being a stirring drama with a surprisingly emotional through-line.

Director Gavin O’Connor is again working with Affleck and returning to a genre that has brought him previous success (Miracle and Warrior). Bolstered by O’Connors proficient direction and balanced screenplay (with help from Brad Inglesby) it is no wonder why I found myself wiping away a few tears. The formulaic approach gets turned on it’s head thanks to being extremely grounded in reality, the filmmakers allow scenes to breathe making the settings and people seem so familiar and visceral, an emotional connection is absolutely unavoidable. 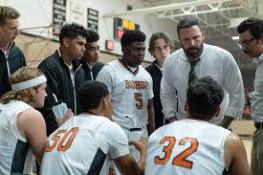 The other side of this film is the sports drama, Jack is called back to his alma mater to coach his old team, a task that was not easily accepted. A sorry excuse for a team and a shadow of its former glory, having not made a playoff appearance since Jack graduated. This is his shot at redemption, a reason to exist again. As a barely functioning alcoholic, struggling to make it through a day without passing out, his personal issues inevitably begin to infect everyone around him. The basketball team begins to gel and Jack is able to help them get a shot at the playoffs, but as the team moves forward Jack starts to spiral. The greatness of the screenplay comes in that it does not rely on the basketball games for its emotional payouts, the highs and the lows come from the characters. The games are all well shot and paced, but it is not subservient to the plot. The stand outs, playing well off of Affleck are his Assistant Coach (Al Madrigal) and the teams Chaplin, Father Mark (Jeremy Radin) who try to reel in his outbursts to some comedic affect. His star player Brandon (Brandon Wilson) becomes an important relationship in Jacks journey towards recovery, seeing similarities in the young mans life leading to a conversation that clues the audience into some of the missing pieces of Jacks past.

Juggling his addiction and his relationships proves too mountainous to overcome merely by throwing himself at his new found meaning in life. The traumatic loss that leads to the separation from his wife Angela (Janina Gavankar) have him retreating into himself, leaving only his vices as an escape. The personal battle that Affleck shares with his character brings a heaviness to the story which not only elevates his role, but the film as a whole. Affleck has a career defining role that he plays with such empathy and nuance that one hopes this is not a crescendo, but one that we can all point to as the start of a reimagined career.