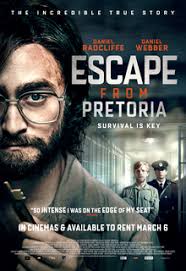 Escape from Pretoria sets out from the beginning to establish with the audience that things are going to be tense. Tim Jenkin (Daniel Radcliffe) and Stephen Lee (Daniel Webber) are white South Africans who are a part of the African National Congress (ANC), a banned political party whose members are being imprisoned or forced abroad. The film starts with the duo planting “Leaflet Bombs” that shoot pro ANC literature into the air, a dangerous and illegal act during the tumultuous apartheid regime. They are quickly arrested and arrive in court before a judge who unceremoniously sentences Lee and Jenkin to 8 and 12 years respectively. The story moves so fast that we barely get to know our two heroes before they are thrust into imprisonment. There is very little backstory or development and that unfortunately leads to a lack of investment in the characters, and no matter how high the stakes get, there is a disconnect that permeates throughout the rest of the film.

Once they reach the prison they immediately begin to hatch a plan of escape. They are so devoted to their cause that they see escaping as further rebellion. Their dedication to such a worthy cause is sincere and resonates in their performances. Radcliffe is compelling as Jenkin, the mastermind behind building the bombs. Being well versed in the intricacies of assembling small parts, he begins to make keys out of wood by studying the locking mechanisms and the guards metal keys while maintaining his other duties in the prison. The prisoners enlist the help of a fellow ANC supporter, a Frenchman named Leonard (Mark Leonard Winter). Leonard longs to be with his son and is the first character you can actually sympathize with on a deeper level. A meeting with his son, which he only gets to see for thirty minutes every year, is brutally cut short leaving him even more bent on escaping.

There is a lot of treading on familiar ground, if you have seen a prison escape movie then you know the story beats, Escape from Pretoria is sometimes able to subvert these tropes with good acting and some convincing storytelling from director Francis Annan. The sneaking around after hours and avoiding the guards will have you holding your breath, a testament to a well crafted script.

Unfortunately, even with the surprise room inspections and nasty guards, the movie is mostly monotonous and repetitive. There are a few thrilling moments and it is fun to see the plan come together, if you enjoy prison escape films this will certainly scratch that itch. but an overlong runtime and lack of any character development has this film feeling a little empty.