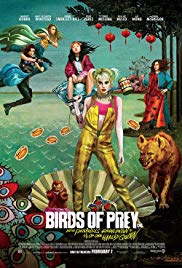 Birds of Prey begins with a cartoon giving some back story on Harley Quinn (Margot Robbie) which was nice because I had entirely wiped the memory of Suicide Squad from my mind. We are dealing with an emancipated Quinn, one not held down by any relationship or any man. That’s it, that’s the movie.

Our somewhat reliable narrator in Quinn brings the audience into her convoluted crazy mind, full of whimsy and color. The aesthetic is pleasing and there is a lot to see here. Director Cathy Yan makes great strides to keep this female centric story personal for her and for females, and in my opinion, does a fantastic job of not alienating us men-folk, unlike a lot of other “female centric” action films. This group of women are not sexualized or made into objects, they are living breathing ass kickers, and that is fun to watch. . . most of the time.

The struggling plot does make itself known to viewers after what feels like a long time, brought to us by a series of irritating  “oops, I’m ahead of myself in this story” interruptions by the narrator. It is not hard to follow, but the narrative is so messy that it becomes frustrating. The story that unfolds does ramp up the energy and stakes to keep things interesting. There are several story lines that are all happening at once, leading all the characters to a final standoff.

The supporting cast is what really brings this film its power. Mary Elizabeth Winstead needs to have a stand alone movie as The Huntress, she kills what little time she has one screen. Ewan McGregor and Chris Messina as Roman Sionis and his henchman Zsasz are gloriously evil. The rest of the birds, Rosie Perez, Junree Smollett-Bell, and Ella Jay Basco give Robbie’s Harley Quinn some colorful characters to share the screen with and it really does have some fun moments. Bringing in Stahelski from the John Wick franchise did seem to liven up the action, but after waves and waves of henchmen all standing waiting to take a beating one by one without much diversity in the way they are disposed, one gets a bit bored.

This is not a bomb of a film, there is enjoyment to be found. If there is a sequel, seeing all the Birds of Prey together for the whole film will be more to its advantage.