Arthur Fleck (Joaquin Pheonix) is mentally ill, lets all go ahead and put that into the universe before we go down this road. His mother was in and out of Arkham Hospital and constantly lied to him. As a child he was abused and had head trauma, possibly leading to his condition, laughing instead of crying. Was all of this because his actual father wanted nothing to do with him? Creating an environment even before Arthur was born that would cultivate and breed destruction and anarchy.

When we meet the adult Fleck Gotham city is at a boiling point and its about to explode, we also have Fleck, who is shown being bullied and beat, a man who has been emasculated and bruised just for trying to make ends meet and take care of his mother. Sympathetic? A villain is being born in front of us and no one is paying attention. From fantasies of being accepting by women to being accepted by a father figure. He was beat down again on the subway for simply being afraid and not having the mental acuity to find a way out of the situation. This time it was by the rich elite, the same powerful force that has landed him and his mother where they are in life. The ingredients are there for retribution. Justified? Kill the rich?

This all raises the question, is Arthur just a product of his environment? Is Gotham city so corrupt that its citizens only hope is to fight back? Or is there a deeper, darker reason that violence seemed to be the only answer for Fleck.

Enter Murray Franklin (Robert De Niro), the man Fleck admires more than any other. The man who also delivers a devastating blow to his psyche by making fun of him in such a public format. It is seen throughout the film that Fleck had violent fantasies about killing Murray when he was on the show, another act of retribution. Now we have moved on from justification and sympathy, now we just have a vengeful, mentally ill man with a lust for killing. There is no higher calling, just a man, beaten down and broken, willing to kill anyone who has crossed him or caused him pain. One of the last images we see is the riotous crowd cheering and admiring Arthur as he rises to the top of the squad car he was just inside, having been birthed as Joker.

A social commentary? A verbose warning about the treatment of mental illness? I think not. It is a very dark origin story of one of the most iconic villains of all time, stop putting your hangups on a comic book movie.

Director Todd Phillips was quoted saying this, “Go try to be funny nowadays with this woke culture,” Phillips says. “There were articles written about why comedies don’t work anymore—I’ll tell you why, because all the fucking funny guys are like, ‘Fuck this shit, because I don’t want to offend you.’ It’s hard to argue with 30 million people on Twitter. You just can’t do it, right? So you just go, ‘I’m out.’”  It is not lost on me that in the end of the film, Joker shoots the ‘comedian’ in the head. A cathartic moment for Mr. Phillips? Perhaps. 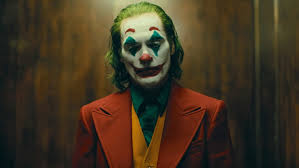 An absolute masterclass in acting, one of Phoenix’s finest performances. Every nuance of the character felt real. The cinematography and design is stunning. The obvious homages to Scorsese and Kubrick. It was really fun to see this world and be in it for a time, a fantastic origin story.

Todd Phillips deserves credit for making a film so gritty and tense that people often see notes of other great directors. Plenty of filmmakers try to do that, and fail miserably. The supporting cast is top notch, Zazie Beets, Robert De Niro, and Glenn Fleshler all make this world become more real.

Watch it and know its a movie about a comic book villain. That is exactly what it is.